Friends, I sincerely am convicted by what The Lord impressed to be preached last Tuesday night. What was the big idea? (That’s a great question to ask ourselves after each sermon we hear). The message centered on the fact that God has a way of whipping us down to size in order to fully utilize our potential. This is for our betterment. Isn’t it wonderful that He has our best interest in mind? The unleashing of our full capacity for service to the Lord is contingent upon our willingness to give Him all the credit for the victories we think we win along the way. The moment we began to feel as though we are the ones gaining ground, that we are the ones making a difference, that we are the ones with the prowess, the ingenuity, and the resourcefulness, that’s when He finds that we are unfit for use. He said that if anyone, placing his hand to the plow, looking back with a longing for where he came from, is unfit for the kingdom of God. Isn’t the entire point to remain fit? We want to remain in vital, lively, disciplined shape for the work of God to go forward.

“But solid food is for the mature, for those who have their powers of discernment trained by constant practice to distinguish good from evil” (Heb 5:14
KJV).

Victories, miracles, blessings, all originate from the God who blesses those who remain fit–trained and disciplined under His tutelage. There is no better coach than the great Coach of coaches!

We have a stellar resource in the Word of God. (Don’t forget, it is the only extraterrestrial communication available to humankind from outer space!) The record is clear: Those who become significant in their own eyes, even though they do God’s work, are in great peril of self-destruction. Remember Old Testament Uzziah? He was an amazing man who strategized in cunning battle. His exploits were commendable and his engines of warfare were extremely noteworthy and garnered him much fame. The end of the story is a tragedy! It all went to his head! It seems as though, if he had had less to rely upon, that he would have been more prone to rely upon his Creator God.

This tendency was exactly what Jehovah had in mind when He said that the army under Gideon was too large at 32,000 fighters. After whittling it down to 10,000, He still said that the size of the army was so big that they would end up taking all the credit, claiming to have won the victory by human means, completely forgetting the God who truly made victory their reality! By finally slimming the army down to a mere 300 soldiers, not only did God win the victory but He also won all of the glory!

What does this say to you and I today? In the most basic sense, we can proceed to climb the ladder, scratch out every resource and commodity within our grasp, all the while thinking that God needs us to have earthly things to accomplish His purpose. How erroneous this thinking is! God does not need our resources, neither does He need our finances! He needs our personal and bodily sacrifice to be made upon the altar of human vainglory. This is indeed our reasonable service! When we present that which we hold the most dear, our body to God as a living sacrifice, we are presenting to him everything else that we hold dear as well, including our time, talent, and treasure. After all, who better to receive the glory than the eternal God who will reward throughout eternity and beyond! Our lifespan is too short to try and grapple for more of what this world seeks: fame, fortune, and prestige. Folks, all you and I need is the Lord Jesus Christ filling our being–our entire existence–by His precious, Holy Spirit!

“Because of the extravagance of those revelations, and so I wouldn’t get a big head, I was given the gift of a handicap to keep me in constant touch with my limitations. Satan’s angel did his best to get me down; what he in fact did was push me to my knees. No danger then of walking around high and mighty! [8] At first I didn’t think of it as a gift, and begged God to remove it. Three times I did that, [9] and then he told me,
My grace is enough; it’s all you need.
My strength comes into its own in your weakness.
Once I heard that, I was glad to let it happen. I quit focusing on the handicap and began appreciating the gift. It was a case of Christ’s strength moving in on my weakness. [10] Now I take limitations in stride, and with good cheer, these limitations that cut me down to size—abuse, accidents, opposition, bad breaks. I just let Christ take over! And so the weaker I get, the stronger I become” (2 Corinthians 12:7-10 MSG).

News You Can Use
Pastor Ron Libby (Gaithersburg, MD) will be our guest a week from Sunday (both services) and Tuesday, 2/23 & 2/25. ALSO, FOR ALL LEADERS OF ANY MINISTRY, CLASS, OR LIFE GROUP: CAC LEADERSHIP PRAYER & SEMINAR, WITH GUEST PASTOR RON LIBBY, MONDAY, FEBRUARY 24, at 7:00 PM.

Revival with Evangelist Joel McCoy begins Tuesday, March 18. He’ll be our guest for that Tuesday and for the following Sundays, 3/23 & 3/30. Awesome young evangelist. He’ll also be our guest at a Youth & Young Adult Revival service on Friday, 3/21 at 7:30 PM.

Our new mobile app, CACDENVER, has been approved at the developer’s level and is now officially in the approx. 2-week process of being approved by the Apple App Store, Android Store, and GooglePlay! Soon, you’ll be able to download it for free and stay even better connected with everything CAC of Denver! 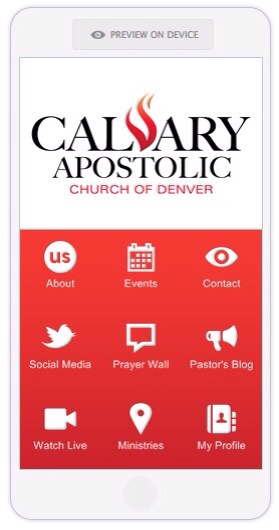